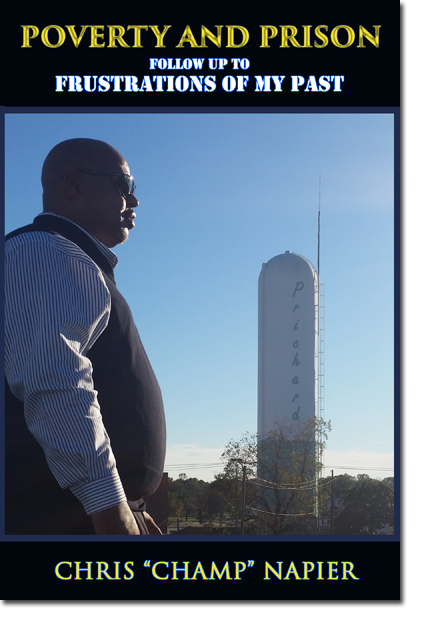 Poverty and Prison
Frustrations Of My Past
By Chris “Champ” Napier

This memoir narrates Napier’s story as he navigates a childhood of poverty in Prichard, Alabama; serves more than a decade and a half in prison; and transforms his life by becoming Muslim and devoting his life to Allah.

We were so broke I had to eat dry saltine crackers or ketchup sandwiches with the end parts of the bread and drink sugar water, when we didn’t have kool-aid.  These times were hard for us. …I can recall a lot of times on the weekend that someone from the clube or from somewhere would burglarize our house and we would have to play like we were asleep until they left.  The only thing they could not steal was a small black and white TV and portable radio.

Chris “Champ” Napier was born March 30, 1971.  He grew up in Prichard, Alabama and spent almost fifteen years in prison.  Upon his release, Napier redirected his life.  He is married and is a member of the Mobile Masjid of Al Islam and the NAACP.  This Napier’s debut book.